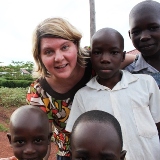 Life finds me all over the globe connecting with people of so many cultures and contexts. In many of my favorite places there is a term like Uganda’s “mpola mpola” which literally translates to “slowly slowly.”  That small phrase is more than a pithy statement but a life lesson that I am finally beginning to learn.

When I am in Jinja and my brow is furrowed with concern over something that is not falling into place, my dear friend and life hero, Jaja Margaret often smiles and tells me “mpola mpola.”  One of my favorite activities is to go the market with Jaja, we casually saunter from vendor to vendor.  Jaja stops every few feet to greet someone, catch up on the latest news or just share a laugh. Every once in a  while we also purchase some tomatoes or corn but we are certainly not express shopping.  We are also not “wasting our time” as many of my friends from the west would think.  In each interaction Jaja is gaining news, building relationships and encouraging people.  She shares a light all along her path that shines well after she has left. In the end we have whatever we came for but she has left so much more.

I am not as good at the journey as Jaja.  (Which I think she would agree with deep down but is far to graceful to tell me.) I stress. I worry about deadlines and efficiency and success.  I like the end result and am more addicted to

accomplishment than I am to coffee.  Sometimes I do see people as props of the project and not divine creations. As you can imagine, this means that the path God has set for me in the third world contains a lot of irony.  But God has also given me amazing guides, like Jaja and I am learning.

For me part of that slowing and appreciating the path involves writing.  Writing is how I process. Writing is often how I realize the sweetness of the roses that I smelled two hours ago.  It’s been too long since I stopped and wrote something longer than a tweet about this amazing journey that I continue live, love and occasionally freak out about.  So here I sit, writing this introductory blog and committing myself to sharing the lessons learned–hopefully sharing some light, some laughter and some good prose along the way.  But more of that later…