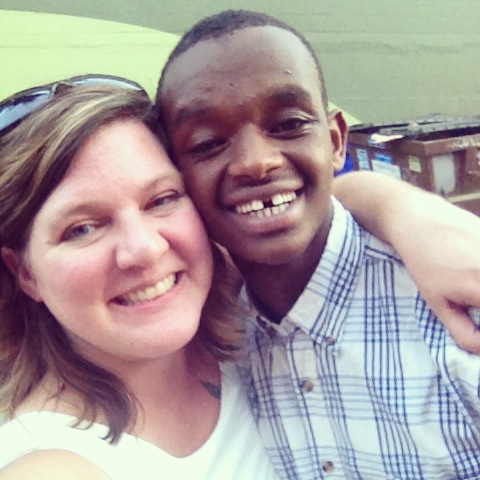 I have fallen in love…

…with about 60 young adults from Congo, Rwanda, South Africa and Uganda. (Some of you were REALLY excited for a few seconds there! Still single. Ha!)  My last post spoke about my joy in my work with These Numbers Have Faces but without these amazing students my work is pretty useless.  So over the coming year my goal is to introduce you to at least two of my students every month.  Warning. You will be inspired.  You will be challenged. And you just might fall in love also.

I will start with Jean Paul Mugisha.  Jean Paul is 20 years old and is a total tech geek.  He loves computers, engineering, electricity and pretty much anything with wires sticking out of it.  The irony of this is that Jean Paul has spent a majority of the last 17 years living with no electricity, computers or sophisticated structures of any kind.  Jean Paul is a Congolese refugee that has been living in Gihembe refugee camp where none of these things are available.

In addition to his passion for all things technical, Jean Paul also has a deep faith and as he grew he believed that working hard in school and excelling at studies would somehow pay off.  Repeatedly Jean Paul would advance to the next level in schooling, only to be rejected for some technicality or another.  Although he was ranked the #2 student in Rwanda his final year of High School and earned a full ride scholarship to university, his Congolese refugee status bumped him out of the running.  This wasn’t the first time that Jean Paul had faced seemingly insurmountable obstacles, so he brushed himself off, said a few more prayers and trusted God to provide  a way from him to get his university education.  (In most of Africa there are no college loans–so for a refugee family that has no possible income, there are no loans or grants to get students into university.  Unemployment is in the double digits in Africa and it is nearly impossible for an uneducated person to earn their way through school.  So often incredibly talented students simply have no opportunity to move beyond High School.) When Jean Paul met Shoshon at These Numbers Have Faces, he knew this program was God’s answer to his prayers.

Yet even after he began his freshmen year, Jean Paul didn’t coast but continued to strive.  Due to some mixed up paperwork, he was initially placed in the less challenging night classes.  After he “followed up” with the registrar repeatedly and doggedly for the first few months of his term, he was moved into the much better day program.  When asked the secret to his success, Jean Paul often thanks God and refers to his schedule.  Each week he writes  a detailed schedule to be sure that every moment is maximized.  One time I invited him to a movie–he has never been in a movie theater–and he politely declined because “personal reading” was on his schedule.  And no Harry Potter on his reading list.  He is deep into biographies of great leaders and is often asking questions about them!

Self discipline, perseverence and grit are innate characteristics that make me admire Jean Paul and want to be more like him, but his grateful heart, thoughtful attention to people and great kindness are why I love Jean Paul.  Through a complete miracle of God, Jean Paul’s family of ten was just resettled to Portland (that’s a whole other blog post!) It has been a great joy for me to see Jean Paul interact more with his three little sisters  and younger brothers.  He  is patient and sacrificing and truly is helping his family find their way in this whole new world. I was sick early last week and Jean Paul was on facebook asking people to pray for me.  He gets calls and text messages all through the night (the ten hour time change is near impossible for some people to remember!) from friends and peers back in Rwanda seeking his wisdom and friendship.

As I glance through this, I realize there are so many details missing. I could write another ten pages about what I admire about Jean Paul, the challenges of his family and the ways in which he amazes me with his grace and maturity, but for now I will just encourage those of you here in Portland to try to get to know him.  Now that his family is here, there is an amazing opportunity for people to connect with thsi family and see what all the fuss is about.  To understand why I am so eager to see all of these young men and women thrive and impact their worlds.  Our world needs a lot of love these days and I honestly believe that investing in these young people will have a positive impact on us all.  To learn about other students in our program, take a look at our impact circles.

One thought on “Let me introduce you…”