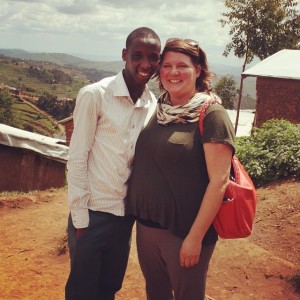 People often ask me, “What do you DO in Africa?”  They are looking for a job description or clear “deliverables.”  And I try to oblige by explaining that I do a lot of consulting around management issues, leadership development and capacity building which basically means that I train folks in Africa to use databases, templates, develop status reports, schedules, to communicate more clearly, etc.  And that is all true and a part of my job that I love.  It exciting to help teach someone how to use some basic tools to make their job easier and more efficient or how to better lead others–whether in Africa or the US!

But the truth is, that is the easy part of my job and isn’t really what I see as my main mission which is to remind people how much God loves them. The training pieces and the projects allow me to be invited into people’s lives in many different contexts here in Africa.  Just this week I visited two refuge camps, was in a middle class home and saw 3 university campuses.   As I get to know people, I ask about their lives and listen to their stories.  I am always blown away about what people will share when you just ask.  They share about their hopes and dreams and their heartaches and challenges.  They really share their lives with me and whenever I can, I try to pray with them and include God’s perfect love into the moment.

I often wonder what people think about this crazy while lady asking questions and praying with them.  Overachiever Tina wonders what is the return on investment in these scenarios?  Many times I get distracted from praying with people because of the “real work” at hand.  But this week I had a good reminder that every little word matters and why this calling is equally important.

One of my “projects” while I have been here has been preparing students for a videographer that was coming to capture some footage of the impact of These Numbers Have Faces work.  So I spent a lot of time talking to students and learning about their lives.  One student was very shy but early on explained that he had a large scar on his eye because of violence when he was a child.  We sat down with him and he told us the whole story.  He is a 19 year-old Congolese but has spent very little time in his home country.  The violence in Rwanda in the 1990’s bled into the Democratic Republic of Congo and stirred up hatred and racism in the already unstable area.  Over the last 2 decades over 460,000 Congolese have sought assylum in neighboring countries, with over 70,000 Congolese refuges in Rwanda alone.  This is exactly how this young man found himself in Budende Refuge Camp in 1997.  His mom and dad had brought him to safety in Rwanda.  Horrifically, the Interahamwe (the Hutu militia) forces attacked the refuge camp and brutally massacred hundreds of people.  His father was one of the lives lost. Tears began to stream down his face as he explained that he was just 2 or 3 at the time and they were hiding in bushes but he was so scared that he decided he just wanted to run away and left his hiding spot and began running.  As he ran two men saw him and grabbed him.  They knew he was Tutsi and were there to kill all Tutsis–even children.  By the grace of God they were in a hurry and didn’t have time for a proper murder.  So instead, they threw him into a house that was burning and left him for dead.  Somehow, he managed to get out of the home but unfortunately not before the fire had severely damaged his eye.  He was moved to a safe hospital and spent months getting treatment and surgery.  He still has a large egg sized scar around the eye and frequently suffers from headaches and eye pain.

I listened in horror as he told this story but my heart broke completely when he told me that his mom had survived the massacre only to die in an accident a few years later leaving him orphaned at the age of 5. He then explained how it has been hard to be an orphan. A loving uncle has created a home for this young man and his siblings, but he explained that losing your parents creates a hole that is always with you. He doesn’t remember his father at all and has but a few memories of his mother. He said living without your own parents makes you feel alone in the world.

Then he got quiet.  After a few moments, I wiped some of the tears from my own eyes and sought the proper words to respond. I told this young man that I was so very sorry for all of the pain that he has endured in his young life.  I thanked God for saving his life.  I explained how amazed I was at all he had accomplished so far in his life in spite of everything and told him that I know that God has a plan to use his story to inspire others and that God is always with him.  And then I grabbed his hand and looked into his eyes and explained that he is not alone.  Through These Numbers Have Faces he has Scovia–also an orphan–and she is his advocate.  She is with him and when he needs advise, help or even a hug, she will be here for him.  I explained that he has me as an Aunty–someone to keep an eye on him and to support him–someone that cares.  He shyly shook his head and we all got quiet.

When I got home that night, I wondered if anything I had said was fruitful or encouraging to this young man that has been through volumes more pain than I may ever know in his short 19 years. I questioned my arrogance at thinking I could even bring any kind of wisdom in his life. And I ended my day praying for this young man. I thanked God for his Leadership Loan to attend University through These Numbers Have Faces. I prayed for peace in his heart and complete healing of his eye.  I asked God to encourage him and prayed that he truly understood that he was not alone.

A few days latter, I was back in Gihembe Refuge Camp with this young man and the videographer.  From the moment I saw him his eyes had a new light to them and he greeted me with a warm hug.  He had been so shy at every other meeting that I was surprised. When we got to his home, he introduced me as his Aunty with a proud flair.  As we wandered through the camp, he stayed by my side and asked me questions about all kinds of topics.  He opened up more about himself and even joked quite a bit.  It was almost like a new person filled with peace and joy and hope.

When I got home that evening, my heart was full of praise.  God had answered my prayers.  Somehow he had used me to properly communicate how special this young man was and how deeply loved.  Looking back, I have no clue what actually got this message into the young man’s heart, but it was a reminder that every word of encouragement, of love, of hope matters.

And that is my main mission, to speak words of hope in the broken places. I never know what will help, but I just faithfully try and trust God to work.   It’s a pretty great mission and I invite you to join me.  Look around you today and ask someone what their story is.  Make time to listen.  Ask God to be present in the conversation.  Say a prayer with them or let them know how their story impacts you.  Mostly remind them that God loves them endlessly and trust that God will stop at nothing to help them understand that truth.

5 For you, O Lord, are good and forgiving,
abounding in steadfast love to all who call upon you.
6 Give ear, O Lord, to my prayer;
listen to my plea for grace.
7 In the day of my trouble I call upon you,
for you answer me.

3 thoughts on “Every Little Word Matters”